Following on from Jury Service 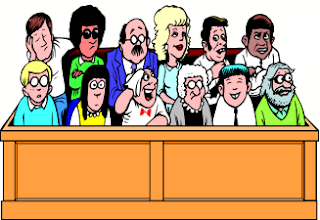 
Denis Campbell, health correspondent The Observer, Sunday 10 January 2010 Article historyMinisters are facing demands to scrap an "unfair and discriminatory" law that bans thousands from being jurors because they have suffered from mental ill-health.

Campaigners claim that many law-abiding citizens are wrongly excluded from jury service after being treated for conditions such as depression, schizophrenia and bipolar disorder.

One in four Britons suffers mental illness at some point in their lives, and one in 10 is prescribed antidepressants, which would be enough to debar them.

Rethink, a mental health charity supported by barristers in England and Wales, will this week launch a campaign to have the rule rescinded. It agrees that some people's mental state makes them unfit to be jurors, but argues that many others are victims of an "archaic" ban.

More than 9,000 people a year in England are refused permission to serve on juries. The government promised in 2004 – and again in early 2008 – to review the situation, but has not done so.

The ban arises from the Juries Act 1974. A section on "mentally disordered persons" bars from jury service anyone "who suffers or has suffered from mental illness, psychopathic disorder, mental handicap or severe mental handicap, and on account of that condition either is resident in a hospital or other similar institution, or regularly attends for treatment by a medical practitioner". Rethink wants that replaced with a new definition of "capacity", based on the 2005 Mental Capacity Act, which would allow many of those currently banned to serve, while excluding those who are genuinely unfit.

Stephen Fry, the actor and comedian, who has suffered from bipolar disorder since childhood, is backing the campaign. "There are thousands of people with mental health problems who are willing and perfectly capable of serving on a jury, but who find themselves rejected solely because they see a doctor from time to time for support or medication," he said. "Exclusion purely on the grounds of treatment for a mental health problem is unfair and discriminatory."

Rethink cites Winston Churchill as someone who, owing to his depression, would be banned. Paul Corry, Rethink's director of public affairs, said that about 50,000 people with mental health problems had been excluded since the government's first pledge in 2004 to consult on the issue.

"People should be judged on their capacity, rather than being arbitrarily written off. It is high time the government carried out a consultation and considered outlawing this archaic and discriminatory practice, which prevents capable citizens from carrying out a basic civic duty."

The Criminal Bar Association, which represents barristers in England and Wales, also argues that the ban is wrong. "Trial by jury is a vital component of our criminal justice system and, in order to work at its best, juries should represent a cross-section of society," said Paul Mendelle, its chairman. "Figures suggest that one in four people will be affected by mental health problems, so it is inappropriate to impose a blanket ban that prevents anyone with a history of mental illness from sitting on a jury without assessment of their capacity."

But the Ministry of Justice ruled out any revision of the rule, and refused to say why the government had reneged on its pledges to consult. While ministers were committed to tackling the stigma and discrimination around mental ill-health, "any change would need to strengthen our jury system. There can be no question of changing the law to allow people to serve as jurors where their ability to do so is in doubt", said a spokesman.
Posted by Unknown at Wednesday, February 03, 2010