History of my relationship with SSRI's

Back in 1998 after I had my second son I fell into a severe post natal depression, I was put on 50mg Lustral, I remember taking that first tablet and how it wiped me out totally so I couldn't stay awake, I went back to the surgery and they suggested taking half a tablet for four days then onto the whole ones, there began my relationship with Lustral. I didn't hold out much hope of anything lifting me out of my depression, but lo and behold, about two weeks later I woke one morning and everything was fantastic, the sun shone and I felt like a huge weight had been lifted off me, I felt "well" and normal again, it was a miracle.
Three months on, I decided as I felt well I didn't need to take the tablets anymore, so I just stopped, knowing nothing about them, a few weeks down the road I was feeling suddenly crap again and so it was back on the tablets again, and so it went on.
I was then about a year on, then I would try and come off with the advice of my doctor to withdraw by taking them alternate days for a fortnight, then every third day for a fortnight and fade them out, doing this would make my head so dizzy but I assumed this was correct, and without fail a few months down the road I would relapse and back on the Lustral again, and so I was on the Lustral merry go round.
2003 was the worst year, I'd come off Lustral at the end of 2002, and throughout the year 2003 I was struggling with my mental health (not knowing it was withdrawal), I tried every damned thing through that year, meditation, a healer, counselling, exercise you name it I tried it, the healer told me my depression was imploded anger, anyone who knows me knows I am the least angry and most laid back person you could meet!! By the time we got to December 2003 I was seriously falling apart at the seams, I couldn't sleep for nights at a time, I turned into a zombie, adrenaline was pumping through me 24/7, I couldn't eat and I couldn't function, Peter was having an equally terrible time at work and couldn't take time off to help me (which he now bitterly regrets), I finally had to admit defeat, I was mentally defective therefore I had to start taking the Lustral again. 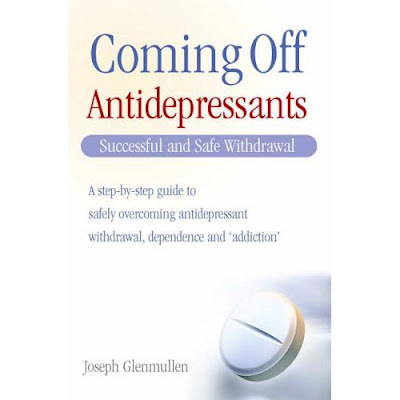 January 2007 a book jumped out at me in Waterstones called "Withdrawing from Anti Depressants" by Joseph Glenmullen, which advocated the correct way to withdraw was by "tapering", and that what I was experiencing when coming off the Lustral incorrectly was not necessarily a depressive relapse, but withdrawals, which can mimic the original physchological problems, this was a revelation to me and made a lot of sense.
Posted by Unknown at Saturday, March 01, 2008